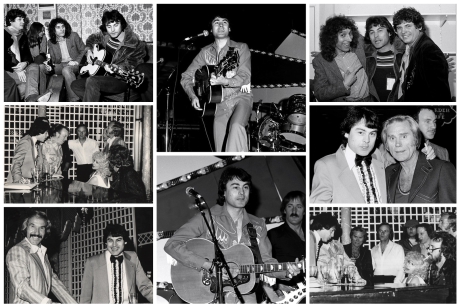 "I first saw Jon Derek and Country Fever perform at London's 'Nashville Room' in 1968 and I became an instant fan. It wasn't until the 1980's though that I got to know Jon personally when I was a photographer on the music scene. He was a snapper's dream - you could not fail to get good pictures of this handsome guy whose on stage presence was totally captivating and whose music was second to none.

In 1980, I had the good fortune to visit one of my all-time heroes, the legendary DON EVERLY in his dressing room at the International Festival of Country Music at Wembley Arena. Engaged in conversation with Don was supremo guitarist ALBERT LEE and his friend and former band member from their Country Fever days, JON DEREK. I felt very privileged to be in such hallowed company. As the three of them exchanged stories and went through a number of songs, sharing Don's guitar, I was able to capture some informal photographs of this historic occasion.

People were drawn to Jon by his warmth of personality and enthusiasm for country music, so when the big names were in town, Jon would invariably be there.

In 1981, I attended the traditional dinner/dance held at the Royal Garden Hotel in London prior to the Wembley Country Music Festival. After the meal, a number of the festival's star-names drifted into the lounge where TAMMY WYNETTE and her husband GEORGE RICHEY sat down at the piano and started singing. They were soon joined by GEORGE JONES, MARTY ROBBINS, HANK THOMPSON and VERY GOSDEN when in came Jon Derek and his wife Sandy. Jon casually strolled up to the singers and joined in. To my amazement he was not only accepted by these international stars but he also became 'their' centre of attention, with them singing along with him! It takes talent to hold your own when singing with such legends amd Jon did that with ease of the true professional that he was. I always considered Jon to be Britain's best Country singer and felt so proud to see him in this situation. Luckily I was able to put my camera to work and again capture a historic moment."

View Graham Barker's entire portfolio featuring Jon Derek by either clicking on the sub-headings (Left) or on the links below.