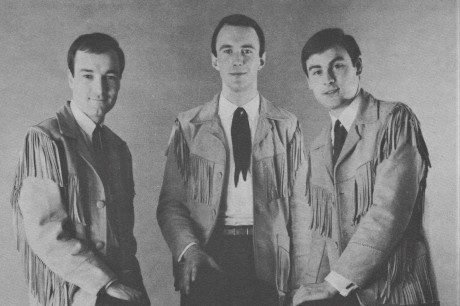 Under the guidance of new manager Don Arden, who was keen to turn the band into another 'Bachelors', he felt several changes needed to be made, including their current name 'The Flintlocks', which, in his opinion, did not appeal. Several names came to mind, but after careful thought, he realised it lay within their first names - Jamie Gunn, Jon Derek and Jerry Hogan.

Jamie, Jon and Jerry topped the bill on a show called 'The New Sound In Country Music' which was staged at the famous 'Grafton Ballroom' in Liverpool (January 1967). They played for an hour to a capacity audience of 1,200 who loved them. Reflecting on the show, Jon was quoted to have said, "The country music scene in Liverpool is marvellous - the people up there really go for our kind of music. We had a great reception and a terrific night and we'd like to go back very soon."

Jon Derek purchased his iconic 'Gibson J200' guitar in the early part of 1967. Jerry wrote in the band's fan club magazine, "Jon has bought himself a Gibson J-200 Jumbo. It is really a beautiful guitar but one wouldn't expect firewood for £315!"  In today's money, that would equate to roughly £5000.

Manager Don Arden secured a new deal for the band with Decca Records and their first single was released in March 1967 (I'd Be) A Legend In My Time, produced by Tony Clarke (The Moody Blues' producer). The same month, prominent Canadian actor and BBC Radio disc jockey Murray Kash became Honarary President of Jamie, Jon and Jerry's fan club 'What Goes On'. Membership went on to top 400 by the summer of that year.

The band's second and, most successful single was released in July 1967, You've Still Got A Place In My Heart produced by Dick Rowe (the man who turned down The Beatles but made up for it by signing The Rolling Stones and Tom Jones). Don Arden spent roughly £1,000 on promoting the record and in an interview Jon said, "This is the best we have done and it is commercially good. We spent three hours on a Sunday morning in a studio with a 30-piece orchestra to get this sound." The single made No.5 on the Record Mirror Country Singles Chart sandwiched between 'Just Between You And Me' by Charley Pride (No.4) and 'Tonight Carmen, by Marty Robbins (No.6).

Friends, Chas Hodges and Dave Peacock (Chas and Dave), who would often turn up at Jamie, Jon and Jerry's Hammersmith gigs, introduced Chris Farlowe and The Thunderbirds' guitarist, Albert Lee to them. Albert was really keen to play country music so they let him sit in with them on some London gigs. Dave Peacock was quoted to have said years later when reminiscing about those days, "Albert was very shy - we kept telling him to turn his guitar up because he'd never play loud enough!"

Jamie, Jon and Jerry supported pop star, Lulu on a show called 'Base Fair Summer of 1967' - staged by RAF Upper Heyford. Jon was quoted to have said after the show, “We were asked, which one of you was it that got Lulu drunk? They were trying to sober her up at the time, before she went on! Honestly, which member of our team would do that? Seriously though, she did a great show and we all really enjoyed working with her.”

Jamie, Jon and Jerry secured a regular spot on a brand new weekly BBC Radio show called, Country Meets Folk presented by Wally Whyton. Recorded before a live audience at the 'Playhouse Theatre' in Charing Cross, London - the show went out on the 'Light Programme' which would later become BBC Radio 2.

Jamie, Jon and Jerry's third single was released in October 1967 - a cover of the Buck Owens hit Together Again. The production was disappointing and failed to capture that Nashville sound. It became a poor relation to that of it's predecessor, the well produced ballad, 'You've Still Got A Place In My Heart'. 'Together Again' would become the band's last release.

In the early part of 1968, Jamie announced that he wanted to take a break from full-time musicianship. Sadly, that meant the end of Jamie, Jon and Jerry. The remaining members of the band - Jon, Jerry and drummer, Jed Kelly evolved into The Jon Derek Group with the addition of Albert Lee on lead guitar and Dave Sholl on bass. This was a skeleton band primarily put together so as to honour any outstanding bookings and, to act as 'backing band' to Irish singer, Clodagh Rodgers on all her forthcoming TV and Radio appearances. 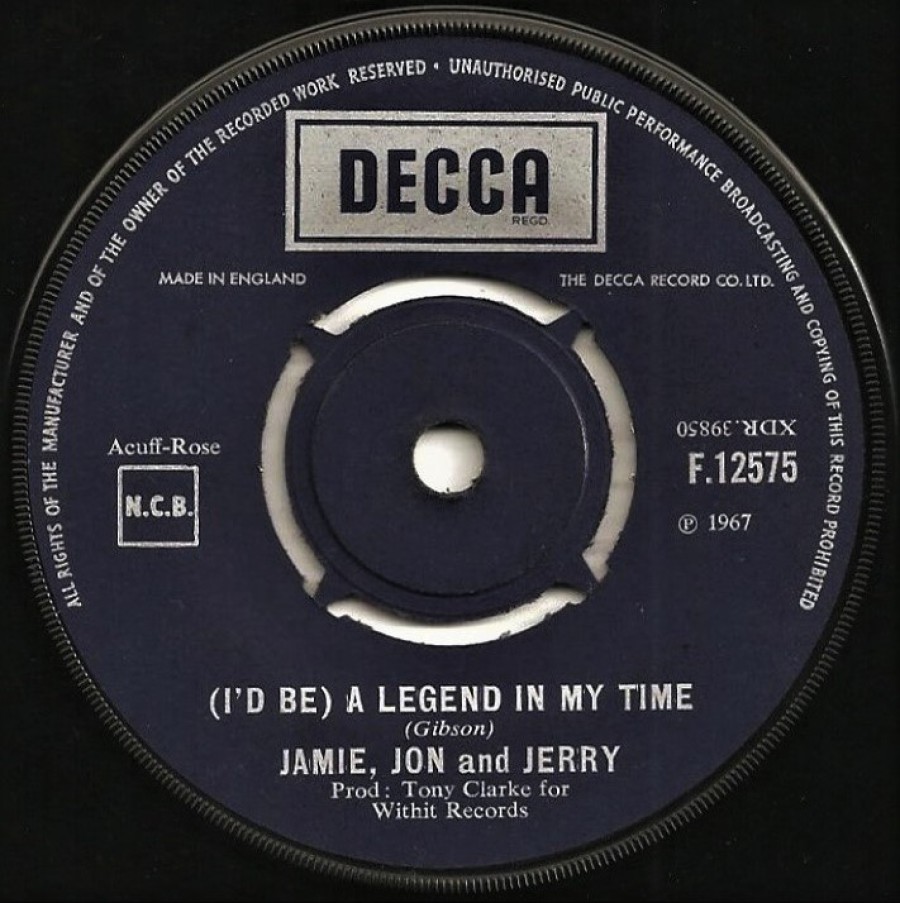 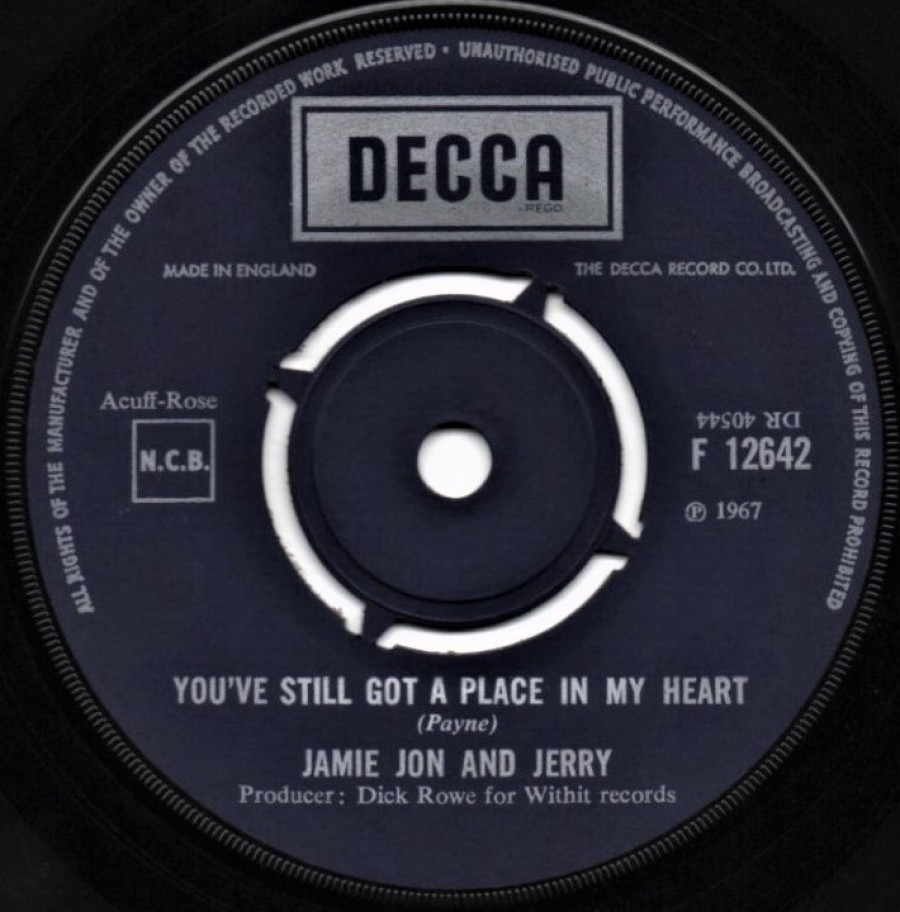 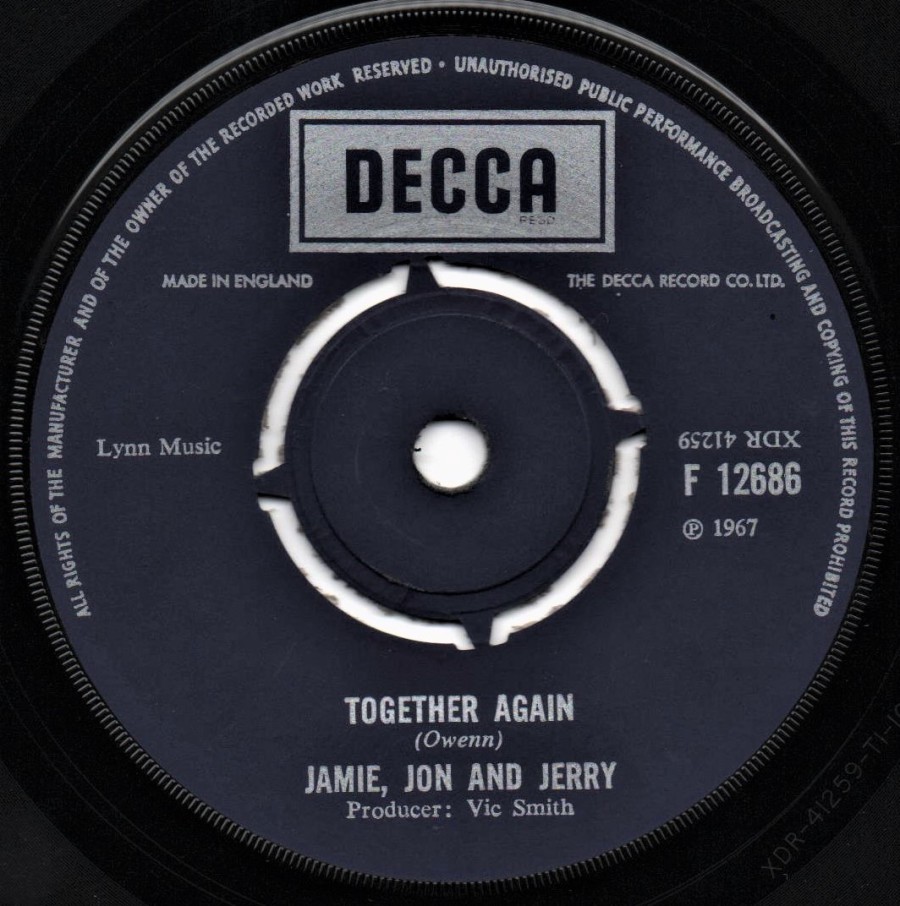 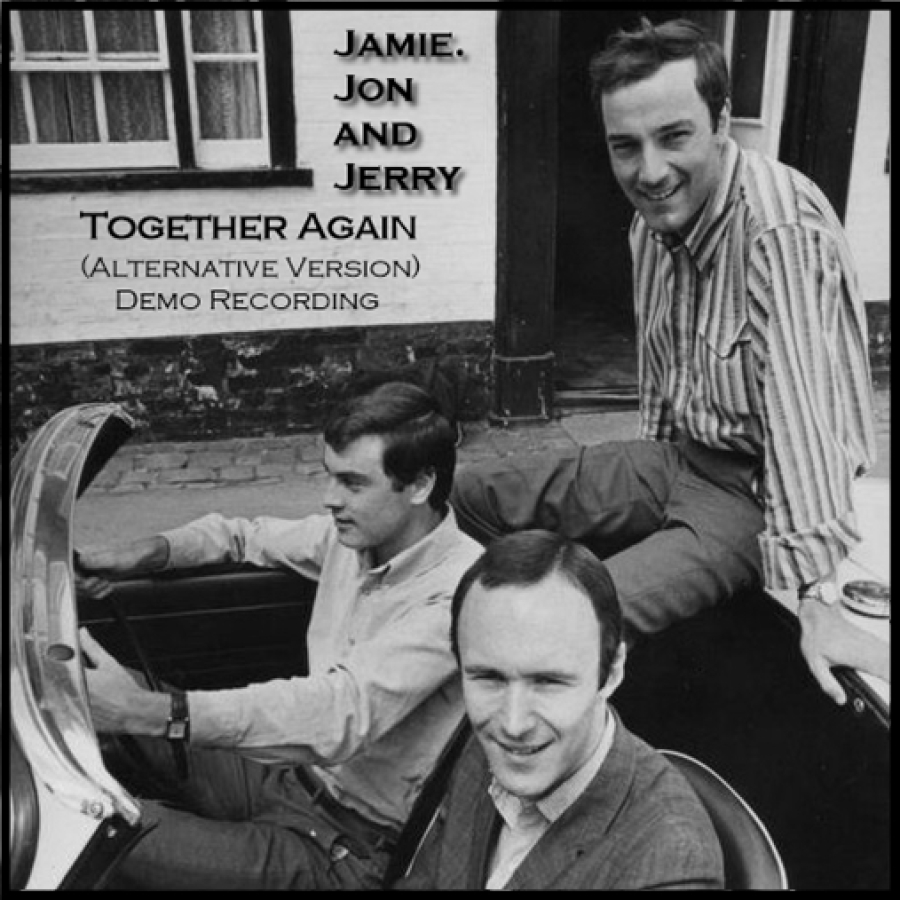 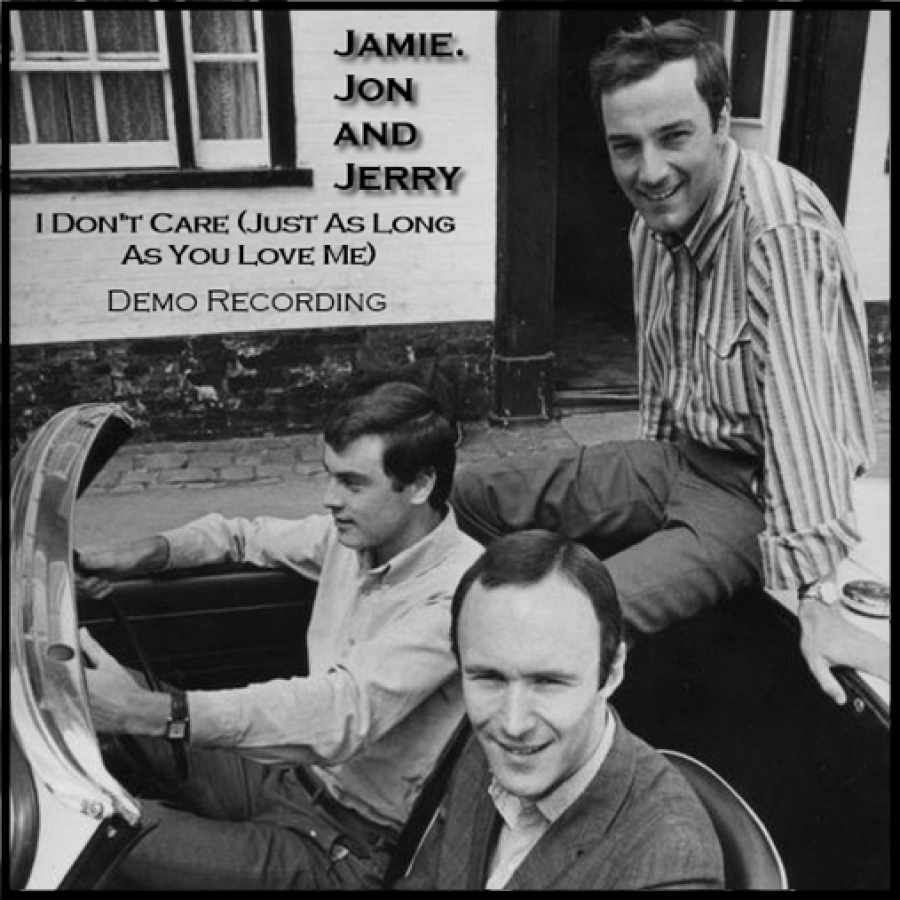