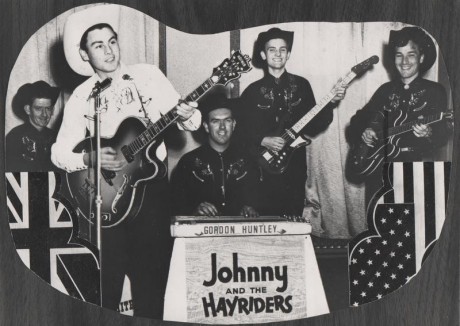 Jon Derek's first semi-professional band The Black Stetson Boys which he formed in 1958 and, Gordon Huntley's group The Hawaiian Serenaders evolved in 1962 and became Johnny and The Hayriders.

Jon Derek became the first British country music artist to perform in stereo for BBC Radio in 1962 when Johnny and The Hayriders took part in a half-hour show entitled 'Country Time'. They performed an instrumental and five vocal numbers. The show was pre-recorded at 'Camden Town Theatre Studios'. The 'Newbury Weekly News' wrote, "Most groups would give their amplifiers just for a chance to play to a multi-million transistor-side audience. Now Newbury’s best-progressed Country and Western gang Johnny and The Hayriders have been accoladed with an invite to transmit in the BBC’s stereophonic schedule."

In June 1963, Johnny and The Hayriders supported Jim Reeves and the Blue Boys when they flew to the UK for a brief tour of US Air Force Bases. Opening the show for Jim, he praised their style and said, “Johnny and The Hayriders are the nearest thing to the Nashville sound that I have heard whilst in Britain.” He readily gave them permission to include one of his numbers in their repertoire – a song called ‘Most Of The Time’. About a week after the tour ended, Jim wrote an article about his trip to the UK for an American newspaper in which he refered to Jon Derek as ‘one of Britain’s most promising and outstanding country music singers’.

By 1965, Johnny and The Hayriders were recognised as one of the best exponents of the modern Nashville sound playing outside of Tennessee. In addition to appearing at all the London venues that made up the newly launched 'Fullers - Griffin Catering Company' country music circuit - they attracted a huge following by performing each week in Hammersmith, London (an area that was fast becoming known as another 'Nashville'). They also appeared the same year at the ‘Southern Country Music Convention' staged at the renowned 'Marquee Club' in London's Wardour Street.