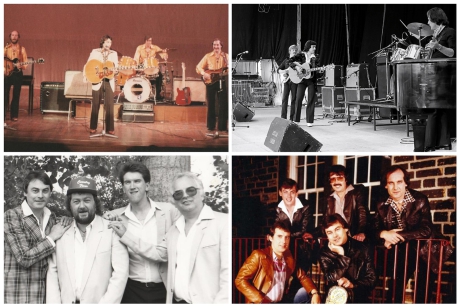 Following the demise of the 'stand alone' cooperative Country Fever in the latter half of 1974, Jon Derek, had vowed to pursue a solo career going forward, however, having legally owned the rights to the name - 'Country Fever' since 1969, he was in the position to reassemble the band and did so occasionally under the name Jon Derek & Country Fever when the money was right or, for major tours and shows.

A good example of this was in 1975, when Jon was approached by the UK's top country music promoter, Mervyn Conn who asked him if he could reassemble Country Fever for some forthcoming work he had lined up. Jon, who was known for gathering around him great musicians and, for his ability in putting together good 'scratch bands', soon acquired three original members of Country Fever; Pete Oakman, Graham Walker and Jed Kelly. Together with Bob Haskell on steel guitar and Brian Golbey on fiddle - collectively 'Jon Derek & Country Fever' carried out various projects for the 'Mervyn Conn Organisation', over the coming months. Notably, these included, supporting American singer, Bill Anderson at the 'London Palladium' in February 1975. They also featured in their own right at the 'International Festival of Country Music' in March and also backed other artists on the show including; Marvin Rainwater, Jeanne Pruett, Melba Montgomery, Wanda Jackson, Jimmy Payne and Miki & Griff. Furthermore, in June, they took part on a show recorded 'live' at the notorius, high risk, 'Broadmoor Hospital' in Berkshire with Jimmy Payne - compered by Jimmy Saville. The album 'Jimmy Payne & Friends Live at Broadmoor Hospital' was released later that year.

Throughout the remainder of 1975 and 1976, Jon invariably continued to work under just his own name, appearing on a number of package shows and tours and working together, for the most part, with Jeannie Denver's band, who would also back him.

It wasn't until 1978 that the name Country Fever reappeared. Jon had been successfully working under the name 'The Jon Derek Trio' throughout 1977 with musicians Dave Waite on lead guitar and Chris Dunn on bass, however, due to an ever increasing work schedule which lay ahead in 1978 involving bigger venues and touring with/backing visiting American artists, it meant Jon needed to augment the 'trio' to a four-piece with the addition of Tony Barnes on drums. Jon Derek & Country Fever were reborn but this time, on a permanant basis.

They went on to appear at all the top events from 1978 right up until Jon's semi-retirement in 1991, including, working with a plethora of country music's 'star names'. Although a never-ending change of talented British country musicians passed through Jon's band - Jon Derek & Country Fever would always remain one of the most professional and highly sought after bands in what became a very competitive field.

For further information, take a look at the following pages: