Johnny and The Hayriders were spotted by well-known BBC disc jockey, Jack Jackson in 1966. He invited them to record a demo at his Rickmansworth studios. He liked the band but not their name, so he suggested a name change to 'The Flintlocks'.

The Flintlocks, as they were now known, later returned to Jack Johnson's studio and, under the guidance of his producer sons, Malcolm and John Jackson, they recorded a single What Goes On originally written and recorded by 'The Beatles' but rearranged for The Flintlocks in a Buck Owens country style. Jon told a newspaper journalist, “I bet the critics knock hell out of it. They won’t like it at all. They are bound to say it’s just another Beatles copy but it isn’t, it’s done the way we want it.” The single was released in June 1966 on the Decca Records label and sold 900 copies in the first four days.

The same month, The Flintlocks supported American country star, Eddy Arnold at the 'Radio Caroline Night Out' show staged at the Wimbledon Palais in London. Also appearing on the bill was Tom Jones.

With proceeds from sales of their first record, the group bought a brand new Ford Transit Minibus costing £900.

Due to the sudden popularity of The Flintlocks, a fan club was set up and the first edition of their 'What Goes On' newsletter/magazine was published in September 1966.

The Flintlocks embarked on a 10-day tour of Scotland with performances in Keith, Forres, Aberdeen, Montrose, Elgin, Nairn, Tain and Lossiemouth.

By late 1966, the band's contract was bought out by top impresario - the infamous music mogul, Don Arden. 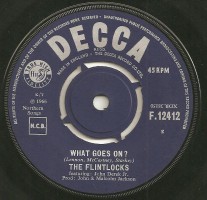