JON DEREK was, for many years, one of the leading artists on the British country music scene. Ever since the early 1960's, mainly due to the popularity and professionalism of his bands at the time 'Johnny and The Hayriders', 'The Flintlocks', 'Jamie, Jon and Jerry' and an agent by the name of 'Lou Rodgers', Jon found himself suddenly working alongside many well known Nashville recording artists, undertaking the roles of 'backing' and 'supporting' them, on their visits to the UK. 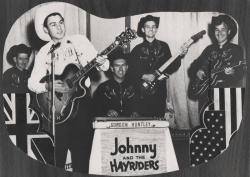 No official diary of events was ever kept - therefore, all listed 'Tours' and 'Shows' on this website have come from reliable and trusted sources and are correct to the best of my knowledge. Following years of research - predominantly using the country music publications and journals of the time, accounts from former band members, surviving photos and articles, the internet and, of course, Jon Derek's own personal career portfolio, what we have now is a good idea of just how busy Jon was throughout his career, not only making personal appearances himself, but also working and touring with a never-ending list of international stars from as early as 1963, when he supported 'Jim Reeves'. 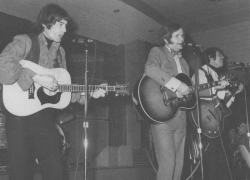 Jon Derek's famed band 'Country Fever' was an automatic first choice to provide support and backing and, if Jon was using any other band at the time, it was his name and expertise in this field that attracted promoters and festival/show organisers. It's often been said, and cannot be denied, Jon went through many personnel changes over the years, nevertheless, he always had the knack of recruiting and attracting the very best musicians and therefore put together professional, first-class bands.

When compiling the content for the 'Tours' and 'Shows' pages on this website, I left out anything that I felt I just didn't have enough facts. In view of this, I know for sure that there are many more tours and notable shows which Jon took part in that have not been documented, or just haven't as yet come to light. What is known though, is that from the mid-1960's, many American acts began coming over to the UK on short promotional trips to perform at the US Air Bases and one or two 'dance hall' venues. I have it from very good authority that Jon's bands, 'The Flintlocks' and 'Jamie, Jon and Jerry' (1966-1968) supported, during this period, such artists as, Tammy Wynette, Del Reeves, Tex Ritter, 'Little' Jimmy Dickins and, Carl Belew (who they also backed). Furthermore, 'Johnny and The Hayriders' supported 'Carl Perkins' when he did his round of US Air Bases in 1965. There was also a tour with the 'Country' comedy duo 'Lonzo and Oscar' in 1968 when Albert Lee was in Jon's band 'Country Fever', however, no details regarding venues/dates are available.

It wasn't until the introduction of the UK's very own country music publications from 1968 onwards such as 'Opry Magazine', 'Country Music People' and a few years later, 'Country Music Review', that shows and tours were more widely documented and advertised.