The annual Peterborough Festivals of Country Music began in 1980 promoted by Jed Ford (1980-1985). Jon Derek made five consecutive appearances at these right up until 1984. Successful events invariably become bigger and better and this extravaganza was no exception. Thousands of country music fans came from far and wide and descended upon the historic city of Peterborough each August Bank Holiday to see the very best in British and Irish acts and, an array of international stars. 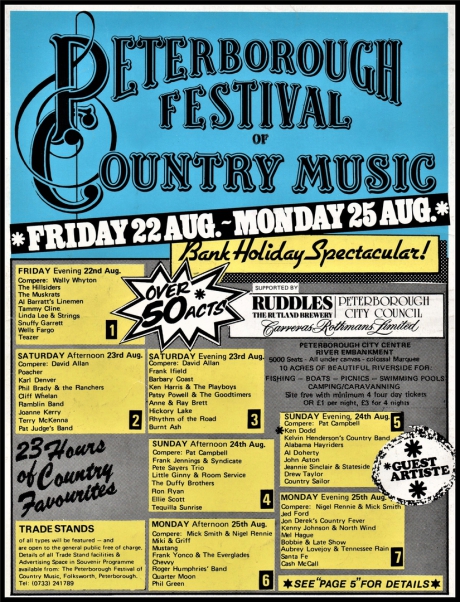 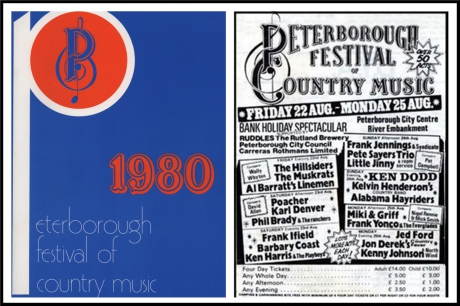 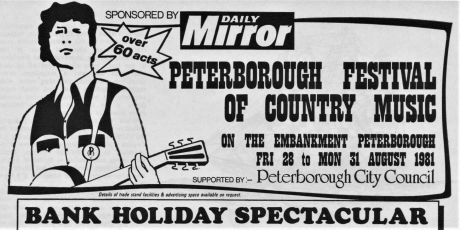 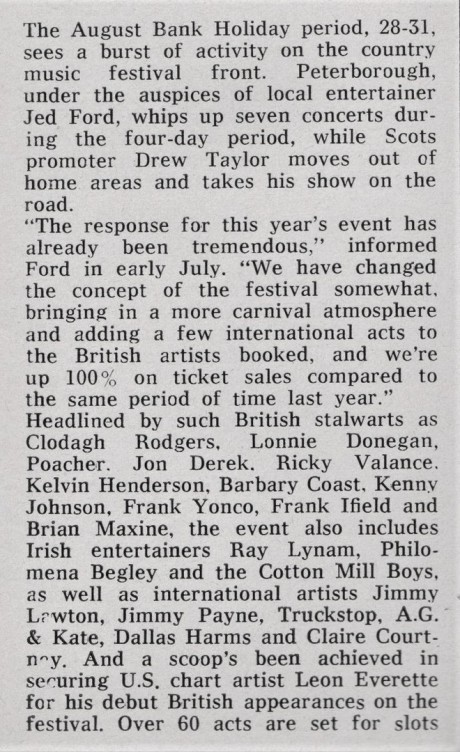 JON DEREK ON STAGE AT THE 1981 PETERBOROUGH FESTIVAL 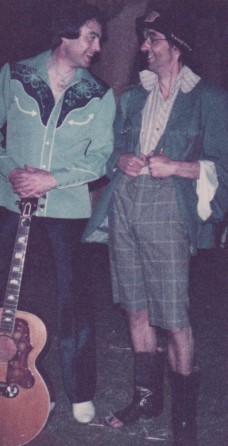 JON DEREK and SNUFFY GARRETT BACKSTAGE PRIOR TO JON'S PERFORMANCE

1982 was the year the stage lights failed during JON DEREK's performance. American Comedian and top music producer Snuffy Garrett was fortunately on hand to to rescue the moment. He delivered an entirely unscheduled comedy cabaret performance ad-libbing his way through the forty minutes it took to rectify the situation. A journalist covering the festival for 'Country Music World' wrote, We saw JON DEREK's HONKY TONK BAND take to the stage and begin to surround us with his Texan bar style music, then we didn't see Jon Derek - or his band! We were plunged into sudden blackness! All the stage lights had failed! Poor Jed - he must have been sweating cobs! 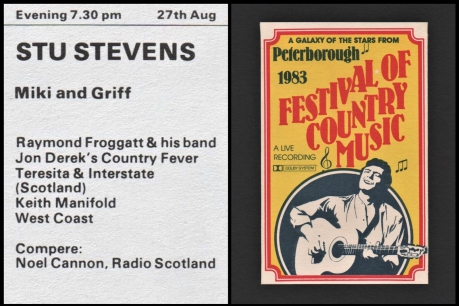 ABOVE RIGHT: A live recording of selected artists who appeared at the 1983 Peterborough Festival of Country Music was released that year on cassette. It features two songs by Jon Derek - 'Hey Duke, You Got True Grit' and 'My Son Calls Another Man Daddy'. 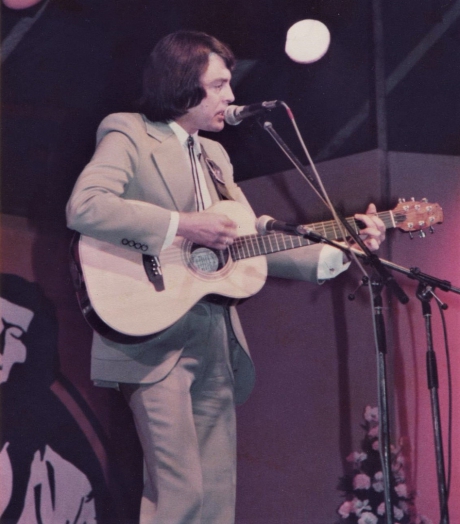 JON DEREK ON STAGE AT THE 1983 PETERBOROUGH FESTIVAL 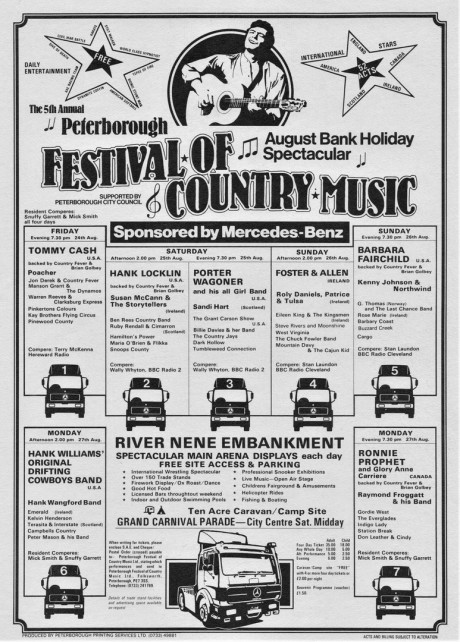 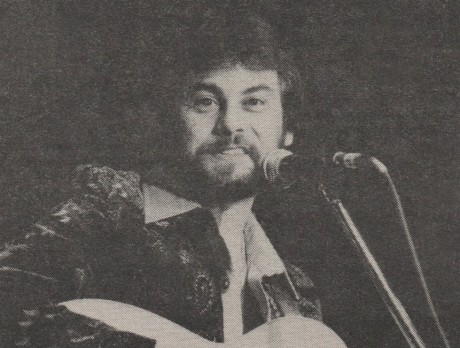 JON DEREK ON STAGE AT THE 1984 PETERBOROUGH FESTIVAL

Possibly around the British country music scene for more years than he cares to remember, JON DEREK's music is always quality stuff. COUNTRY FEVER were bolstered by Brian Golbey hiding under a big hat, and steelie Les Wright. Jon having been saddled with the responsibility of backing most of the bill topping US acts was here in his own spot and the material was very much classic country, 'Kentucky Woman' and 'The Door Is Always Open' - Golbey offered 'Deep Water' and the mix proved to be exactly what the audience wanted.

Second act was that favourite of mine, JON DEREK & COUNTRY FEVER and judging by the audience's reaction, a firm favourite of theirs also. A highly polished performance this, which included his hit number 'Hey Duke You Got True Grit'. Great stuff for my money - he could have stayed on longer! 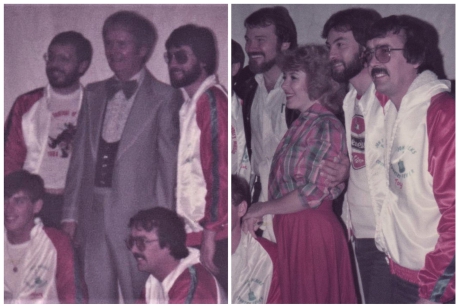 ABOVE LEFT: Jon Derek and members of Country Fever with Hank Locklin

ABOVE RIGHT: with Barbara Fairchild 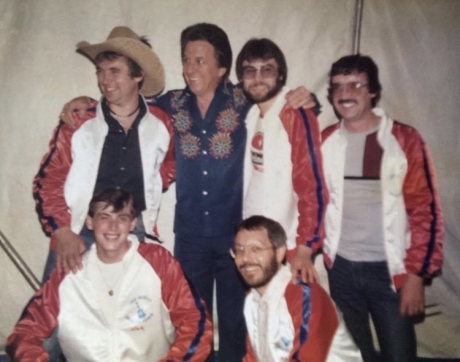 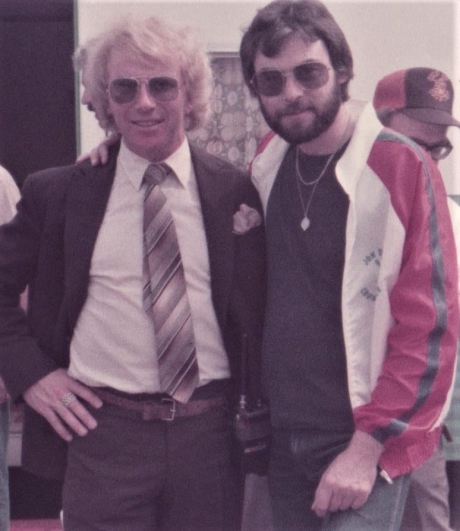