JON DEREK was inducted into the British Country Music Hall of Fame at the BCM Awards - September 2, 2012 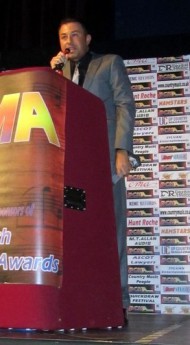 Hosted by singer/songwriter Charlie Landsborough and BBC Radio 5 Live/TV personality Nicky Campbell, it was a great honour to head down to London to collect this prestigious award on behalf of my late father, Jon Derek at the 2012 British Country Music Awards.

Jon Derek was one of the very first British artists to venture into country music back in the late 1950's/early 1960's. It was a very difficult scene back then - there were no country music clubs or festivals - instead, country artists and bands had to make do with the pub circuit, the US Air-Force bases or playing at local dance halls. It wasn't until a certain gentleman by the name of Mervyn Conn took a big gamble and staged the biggest event of its kind from 1969 onwards - the 'Wembley Country Music Festival' that things really started to improve. These popular annual festivals and numerous package tours staged by Mr Conn paved the way for so many of our well-established home-grown artists to appear alongside Nashville's star attractions.

My father was a true professional and appeared at some of the most prestigious venues and alongside an endless list of the finest names in country music - forming great friendships with many of them too. He went on to influence so many fellow musician's careers - many of them saying how they looked up to him and learnt so much from him. 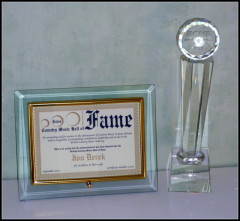 Awarded to the late Jon Derek

The 'Hall of Fame' award is presented for excellence in their craft, for the services to the advancement of Country Music in Great Britain and in recognition of outstanding contributions, leadership and service to the British Country Music industry. 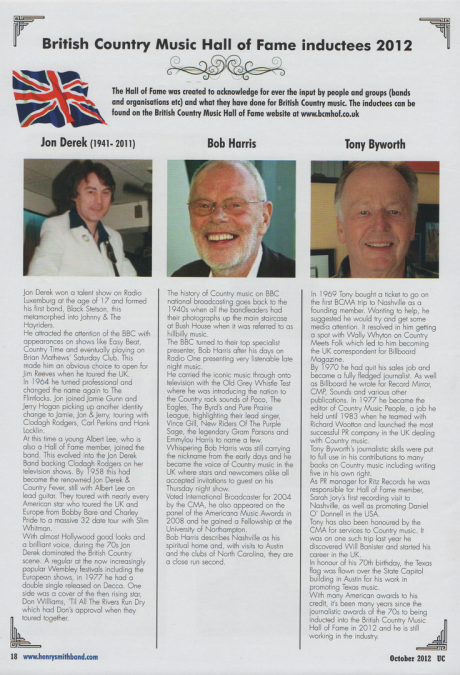