TILL THE RIVERS ALL RUN DRY 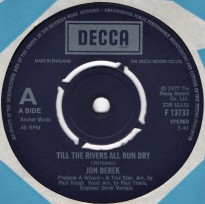 Every recording artist hopes that at some point in their career a certain song will come along - one that will stand out from all the others - a song that will become their own personal anthem and - the one they will be predominantly remembered for. It happened for Tammy Wynette (Stand By Your Man), for Billie Jo Spears (Blanket On The Ground) and for Charley Pride (Crystal Chandeliers) - it also happened for JON DEREK with TILL THE RIVERS ALL RUN DRY released on Decca Records (F13733) - October 21, 1977. 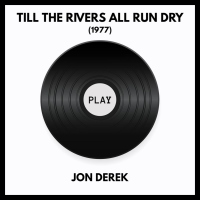 Having recorded for Decca Records in the past with 'The Flintlocks', 'Jamie, Jon and Jerry' and 'Country Fever', Jon was no stranger to this iconic label. He teamed up with them again in 1977 - this time as a solo artist. 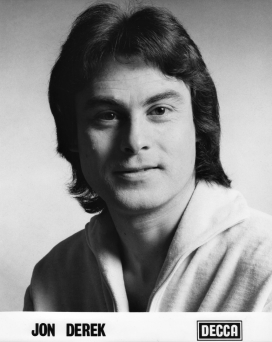 They had plans for an entire album - five tracks had already been recorded at their renowned studios in West Hampstead, London - however, soon after the release of 'Till The Rivers All Run Dry', Decca decided not to continue with a 'Country' division and then subsequently sold out to Polygram. The album, therefore, never materialised - nevertheless, Jon eventually obtained the rights to the five tracks and later included them on his 1984 album release 'Goin' Back' which, became the fastest selling British country music album of it's time.

'Till The Rivers All Run Dry' was groundbreaking - it was relatively unheard of for a mainstream British country music artist to receive so much airplay on national radio, which not only included the BBC but also regional independent stations. Many journalists plugged the record too in their write-ups. One read, "Jon's great Decca single 'Till The Rivers All Run Dry' is getting heavy disco play. Could it be Jon is opening the door to the teeny-bopper market - it's great to see 'Country' shoving punk rock aside."  Another, John Firminger (Country Music Round Up - North Report) wrote, "A recent visitor to this area was Jon Derek who was travelling around the country promoting his latest single on the Decca label 'Till The Rivers All Run Dry'. The single is, simply, first-rate and really justifies the hard work Jon has put into the British country music scene." Many others tried to describe the song's innovative, re-arrangement of what had only been previously known to many as a bit of a lack-lustre Don Williams song. One wrote, "It starts with the full depth of Jon's voice, plus acoustic guitar - then building with a chorus into a great piece of harmony. The country sound is not a little infilrated by a touch of rock too." It was therefore surprising to read one negative response by journalist, Alan Cackett who wrote at the time; "I doubt many people will buy this as they already have the Don Williams version."  I do wonder whether he had actually heard Jon's take on the song before making this comment! 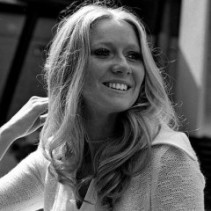 Irish pop songstress, Clodagh Rodgers (Come Back And Shake Me, Jack In The Box) can be heard on backing vocals along with her sister, Lavinia. Decca's vocal arranger, Paul Travis was responsible for creating the part they played along with the producer, A Wizard. It's believed Decca used their own session musicians. 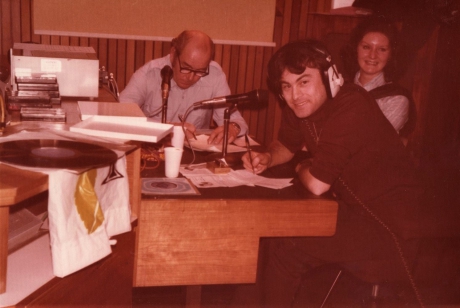 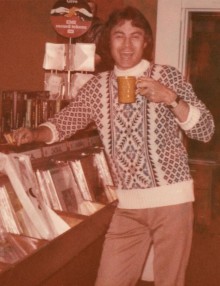 Jon taking a break in Hull

Promoting 'Till The Rivers All Run Dry' took Jon on a nationwide tour of radio stations. Broadcaster and journalist, Wally Wallace, writing for the publication 'Country Music Round Up' wrote, "I'm delighted that Jon came into the studios for a very interesting interview. Also, I was able to play his new pre-released single for the first time over the airways. I also accompanied Jon to the studios of 'Swansea Sound' for a further interview to promote the new single. It is very, very good and he deserves a lot of success with it. Here is an artist who does try to do his own thing. Buy it, you will be very pleasantly surprised." 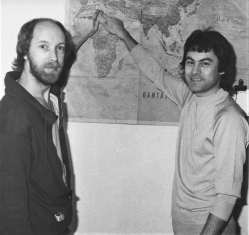 The overall success of 'Till The Rivers All Run Dry' in Malta, was mainly due to the BBC and it's British World Service programmes. Broadcaster David Allan placed the record top of his playlist. A British Forces radio station based in the Maltese capital, Valletta then followed through. 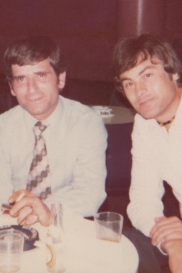 Together with promotion and coverage by Vince Laus of Radio Malta and the Malta Country Music Appreciation Society, Maltese Television, The Times of Malta and Malta News - Jon gained a hit record. But it wasn't only the A-side that was being played, the Maltese people loved the B-side too 'Making Believe' even more so, after first hearing Jon perform it on a Maltese TV programme whilst there on tour in the early part of 1978. 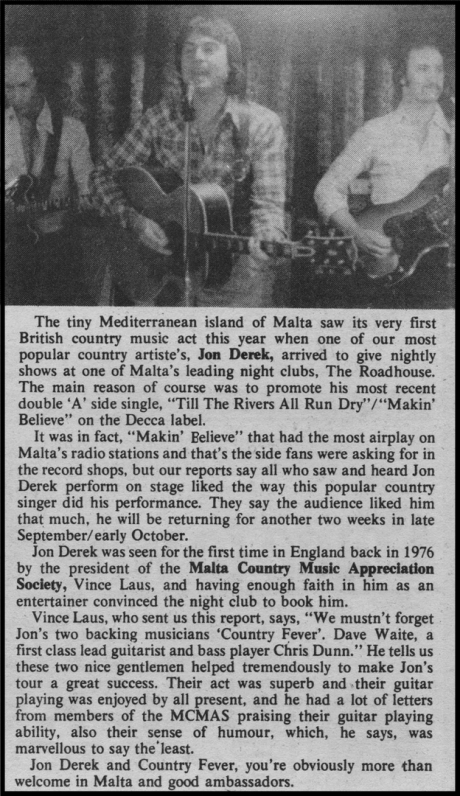 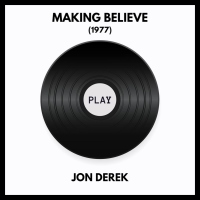 In the UK, the popular British General Forces radio programme, 'Family Favourites' presented by Jean Metcalfe was receiving requests for 'Making Believe'. All in all, Jon scored a double sided hit record in Malta with both songs reaching the No.1 slot on their chart. British country music artist Tony Goodacre, wrote in his column for the publication 'Country Music Round Up', "Shortly before the Maltese charts were discontinued, British country stalwart Jon Derek did reach the No.1 singles slot with Making Believe."

Broadcaster and journalist David Allan wrote in 1978 for the publication 'Country Music People', "Jon Derek has recently returned from Malta where he's in the superstar category and his version of Till The Rivers All Run Dry has topped the local charts for many weeks. What a pity and a sad reflection on the state of local country music that he has to go to somewhere like Malta to receive the recognition he so rightly deserves." 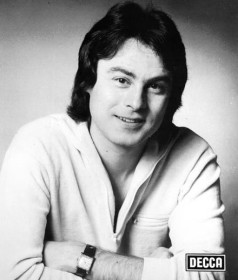